Another year under our belts and some new changes. We decided to lay low for the better part of the beginning of this year with some much needed rest. In the past 6 years we've done 1000+ shows.


We are grateful and honoured to have shared the stage with so many great guitar players too! Including Russ Brent, Jim Baxter, Conrad Walz, Greg Cox, Gil Tougas, Dany B, Matt Beatty and Chad Holzman. If we forgot anyone, we certainly apologize

We will be taking this time to fulfill any commitments to gigs we have booked and to take a breather and find our direction.

We look forward to seeing you all in 2017 on our many new adventures!

Hi from the Rustic Brothers!

It's been a crazy Summer 1015! Lots of shows and changes. We've added some shows to our calendar and will be announcing some more soon!

Randy, Curtis and Andrzej
Posted by Unknown at 19:37 No comments: 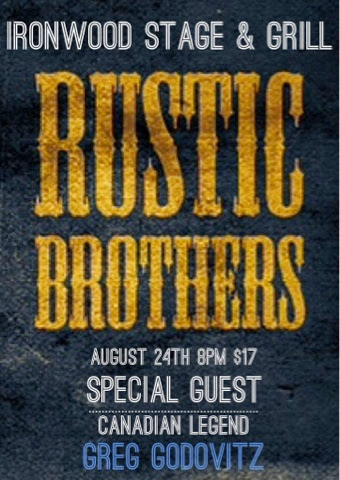 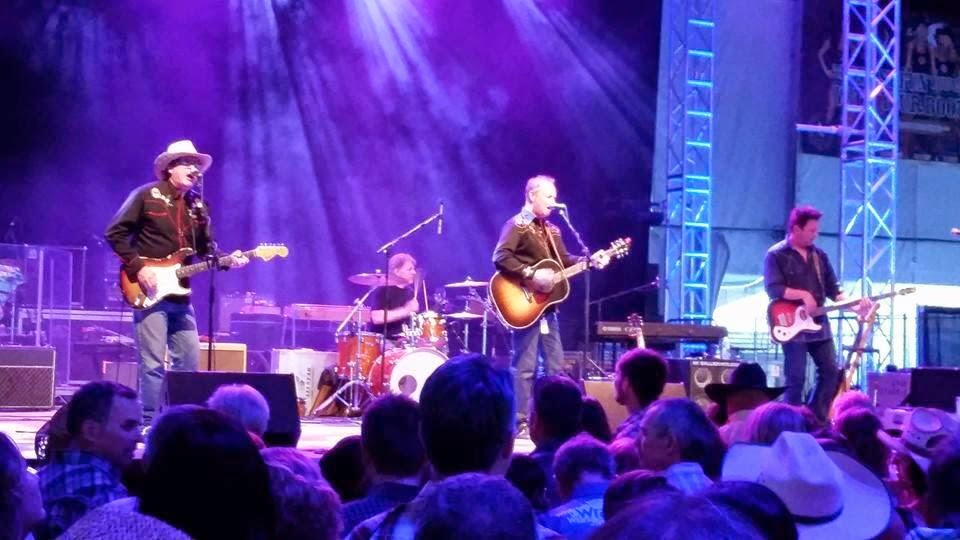 What a thrill opening for one of Canada's most accomplished and loved bands - Blue Rodeo. We played to a sold out crowd and they cheered as we played all the songs from our debut album, with some new songs as well! Thank you Blue Rodeo, Livestar Entertainment, Blue Rodeo fans and of course, our fans that drove from all over Western Canada to come see us perform!
Posted by Unknown at 08:17 No comments:

When I lived in Toronto in the mid 80's, there was a great vibrant scene that I was fortunate enough to  take part in. One of the key bands in that scene was Blue Rodeo. I still have a ticket stub from the Copa from November 25, 1987. The opener was Crash Vegas and Greg Keelor played in that band as well.

Years later, and after many times seeing Blue Rodeo live, and meeting them on numerous occasions, I finally get to be in a band that is set to open for them at their annual Cowboy's Stampede show!

What makes the event even sweeter, is the Rustic Brothers bass player, Curtis Cripps, shares the stage with his brother Colin Cripps, now the guitar player in Blue Rodeo. Colin mixed our debut CD and has become a friend as well.

We are really excited to share our music with Blue Rodeo fans and be a part of the Blue Rodeo experience!

How was your summer?

The summer of 2013 has been a whirlwind of activity for the Rustic Brothers!

We released a video of us live at the Ironwood for the single Leave http://vimeo.com/67593986

We did a show during Stampede 101 with Colin Cripps and Mike Little, (If you don't know who they are, google them. It's impressive!)

We've written new songs that we are incorporating into our sets!

We performed a benefit for the High River flood victims with the cast of Heartland, Tom Jackson and the Honeybadgers.

We took part in the soon to be historic Alberta Flood Aid at McMahon Stadium to help raise funds for the victims of Alberta's 2013 flood disaster!

Calgary Herald did a story on us. See below


Maybe it’s the leftover glow from July 1.
Hell, maybe it’s the long, libationated evening they’re just coming off of.
But, on this particular Wednesday morning, two members of local roots rock act the Rustic Brothers are willing to make a fairly bold pronouncement: They could very well be the ultimate band this country could fly its flag for.
“We’re a truly Canadian band,” bassist Curtis Cripps says, pointing at fellow bro, guitarist Randy Hutchings, sipping a coffee across the table. “He was raised in Newfoundland; I was raised in Hamilton, southern Ontario; Geoff (Brock, guitarist) was born in Canmore — he’s an Alberta boy; and our drummer (Andrzej Ryszka), he’s from the East Bloc, he grew up in communist Poland, so he’s the most Canadian out of all of us.
“We’re a Canadian band,” Cripps says again. “All we need is a keyboard player from B.C. —”
“F—k. That,” interjects Hutchings with a laugh.
Ah, well, perhaps that particular regional bias is, itself, probably further evidence of their CanCred and most certainly evidence of their allegiance to Calgary, the city where the four seasoned vets ply their trade and are regular fixtures.
It’s something they’ve been doing for the past two years, ever since they met at Morgan’s Pub during the Saturday afternoon jam, which they are also now the regular hosts of and which, the band thinks, sums up their musical style and influences — anything goes.
“Between the four of us, our likes, it can be one day we’re talking about Merle Haggard or Waylon Jennings, or the next day it will be us going to Alice In Chains . . . it’s all that,” Hutchings says, referring to the previous evening’s celebrations.
“The pantry, it’s a very big pantry with the four of us,” Cripps agrees. “Which is great because there’s lots to pick from, there’s lots of influences.”
Hutchings continues, “There are certain styles of music that we all love, but the melting pot is what makes us the Rustic Brothers.”
The result can be heard on the quartet’s self-titled debut, which was released earlier this year. It’s a roadhouse jukebox that spits out a steady stream of classic sounding country rock, with just the perfect amount of twang and two-step fuel while also satisfying those who like a little poppy, Jayhawksy jangle in their mix.
It’s as tight, polished and pro as you’d expect from a band that’s made up of guys who make their living making music, wherever and whenever they can, which, with their sound ensures, is pretty much anywhere — country bars, folk clubs, rock venues, etc.
Helping, too, is that while they admit their younger, rock star delusions of grandeur are long gone — and with it the want or need to get in a van and head out for any road that leads to stardom — all four are nonetheless committed to the band and committed to each other, on a musical and personal level.
“The name really does mean what it means,” Hutchings says. “We are brothers. When I broke my leg in late December, and I was laid up for the first three weeks in January and I couldn’t do gigs, these guys did them without me and paid me.”
“We still split it four ways,” Cripps says. “He’s a brother, what’s he going to do? He’s got to eat, he’s got to pay his bills, so.”
The fact that they’re already booked tight until next January certainly means that shouldn’t be a problem.
Even the next 10 days of the Stampede are filled to capacity for the Rustic Brothers, including that regular Morgan’s jam, a weeknight happy hour gig at Craft Beer Market from 3 p.m. to 8 p.m. until July 12, and, more importantly, their own special Stampede show Sunday at the Ironwood.
The band are making it a special event by also increasing their brotherhood — literally. Along with local keyboardist Mike Little (yes, born and raised in B.C.) who regularly plays with George Canyon, the crew will also be welcoming into their fold Curtis’s sibling, famed Canadian player and producer Colin, who has worked with everyone from Bryan Adams to Kathleen Edwards, and who also mixed the Rustic debut.
“It turns out that my brother Colin was available, so I just booked him, said, ‘You’re playing with us.’ He’s like, ‘Am I?’ I said, ‘Yes, you’re playing with us. Done, over,’ ” says Curtis with a laugh. “It turned into a great opportunity to have a good show during Stampede.”
It will also be a good opportunity for the band to give back to the community where they all met and now make their home. They’re planning on auctioning off signed posters and albums for flood relief, and will also donate 100 per cent of the iTunes proceeds from album track Don’t Give Up, which was written about the horses of McBride — a pair of horses trapped in an avalanche in B.C., who were saved by members of the surrounding community — but which has now been adopted by the CBC as something of an unofficial flood anthem.
“Who knows, it might not add up to much,” Hutchings says of the planned donations, “but it will add up to something.”


Good things often do.
Posted by Unknown at 21:56 No comments:

Rustic Brothers are set to play Craft Brewhouse July 4 & 5 and July 8-12 from 3-8 each day!
Last year we played one show but we were booked elsewhere, so we are very pleased that Craft asked us to be the house band for Stampede!
Posted by Unknown at 13:51 No comments: